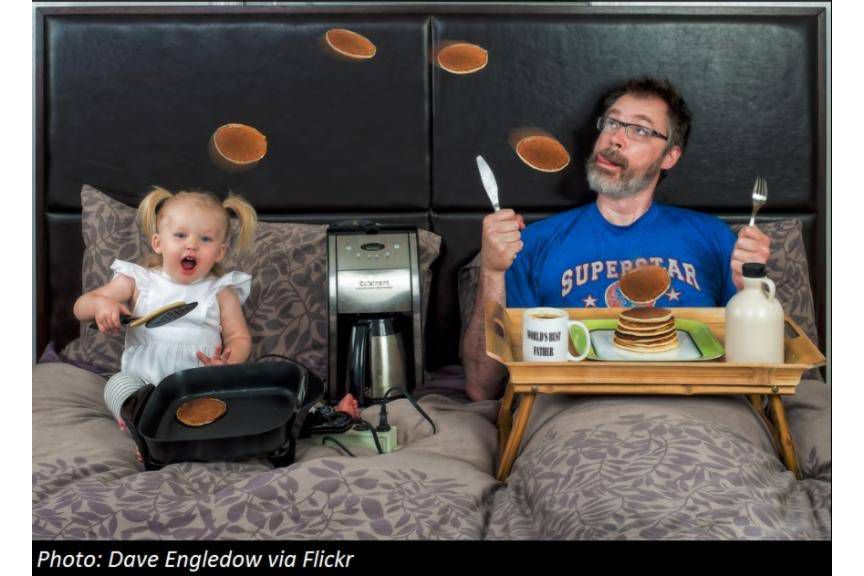 Today is Father’s Day, the day we honor our dads for all the great things they do. But dads aren’t always sure that they’re doing a good job. So one dad, Dave Engledow, decided to show the worst possible fathering in a series of pictures. He posed his baby girl Alice with sharp objects, hot ovens, dangerous electrical equipment — and always with Dave’s “World’s Greatest Father” coffee cup in the picture. Now, Alice didn’t REALLY hold marshmallows over a fire or play with toys in the toilet; her dad used the computer to make the photos look that way. But Alice does look like she’s having fun.

Wee ones: If Alice is roasting 4 marshmallows, what numbers would you say to count them?

Little kids: If the photo shows 5 pancakes in the air, 1 on the hot griddle and 1 on Alice’s spatula, how many pancakes are on their way to Dave?  Bonus: If there are another 6 pancakes on Dave’s plate, how many are there in total?

Big kids: If Dave photographed Alice for 45 minutes in the bathroom, then spent 45 more minutes on the computer to “put” toys in the toilet bowl, how long did that photo take?  Bonus: If the photo with Alice on the car roof took Dave 240 minutes total, and the computer work took twice as long as the actual picture-taking on the car, for how long did Alice sit on the car?

The sky’s the limit: Dad Dave had to snap a lot of pictures, and use up a lot of food. If he took 5 pictures and burned 50 marshmallows total, and used 1 more marshmallow on each photo than the one before, how many marshmallows did he burn on the 4th photo?