Home » A Teddy a Day Keeps the Doctor Away 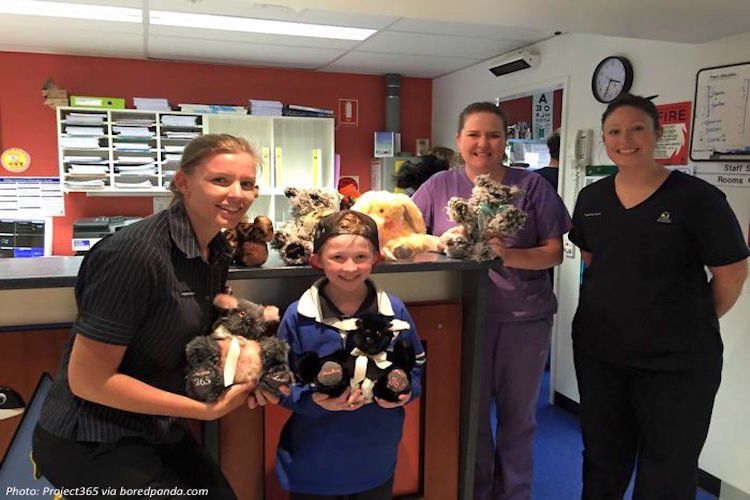 It’s no fun being sick. It’s even worse when kids are so sick that they have to go to the hospital. So a boy named Campbell Remess wanted to help out. He asked his parents if he could buy stuffed animals to send to kids in the hospital. His mom and dad loved the idea, but said they could buy only a few because it would cost a lot of money. So Campbell did the math: he realized that if he bought furry fabric and sewed on little eyes and noses himself, he could make more stuffed animals with the same amount of money! He decided to make 1 stuffed animal a day all year, and “Project 365” was born. This great kid has now brought toys and smiles to children in hospitals for more than 5 years. Check out the pictures of his awesome fluffy friends!

Wee ones: Find a teddy bear or other stuffed animal (or any toy animal). Count the eyes. Now count its feet. Does it have more eyes, or more feet?

Little kids: If you make mittens for your 2 hands and for your teddy bear’s 4 paws, how many mittens do you make?  Bonus: If Campbell makes 4 teddy bears in a day, how many eyes does he sew onto them? (Each one gets 2 eyes.)

Big kids: A couple of years ago, Campbell made 405 stuffed animals in 1 year. How many more than 1 toy per day did he make? (Reminder: A year has 365 days).  Bonus: If Campbell started with $120, and he could buy teddy bears at $10 per bear or make them at $6 per bear, how many MORE bears could he give kids by making them?
Answers:

Wee ones: Unless it’s a bird or other 2-footed animal, it probably has more feet than its 2 eyes.