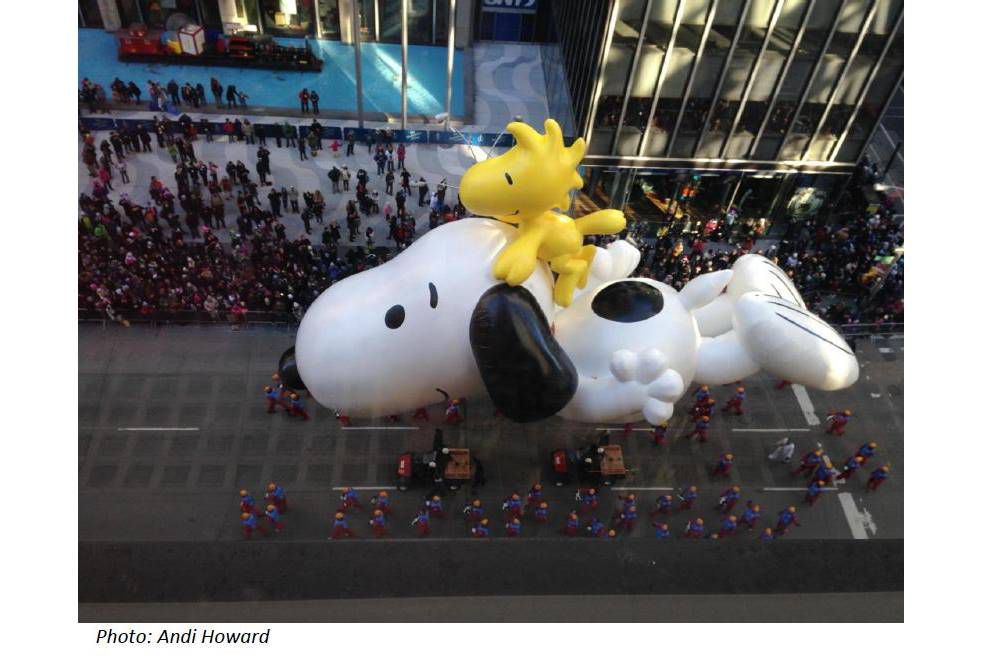 Any great parade has marching bands, clowns, and giant inflated balloons shaped like our favorite characters. The Macy’s Thanksgiving Parade in New York has it all. Macy’s first launched the event in 1924 as a Christmas parade, with just 3 floats. Since then the extravaganza has become bigger and better. But it’s also had its ups and downs. In 1956, all the air came out of Mighty Mouse, and in 1962, heavy rain filled Donald Duck’s hat, which eventually dumped 50 gallons of cold water on the crowd. Even so, over 3 million visitors come to New York to watch the parade, and hopefully they’ll stay dry.

Wee ones: If as the parade passes by you see a marching band, then a giant balloon, then a band again, then a balloon, what do you think you’ll see next?

Little kids: If the 5th float just passed by you, how many floats passed by before that?  Bonus: If 150 million people watch it on TV and another 3 million watch it in person, how many millions of people are watching?

Big kids: If the 1st balloon has 15 people walking under it, then the next has 23 people, then the next has 31 people…how many people do you think the next balloon has?  Bonus: Each giant parade balloon is filled with 12,000 cubic feet of helium — enough to lift 746 pounds! If it picked you up, how many more pounds could it lift?

The sky’s the limit: The first parade in 1924 had 250,000 spectators watching in person, and about 4 million spectators in 2016. If the parade crowd took the same number of years to double each time, how many years did it take to double once?

Answers:
Wee ones: A marching band.

Big kids: 39 people, since the number keeps jumping up by 8.  Bonus: Different for everyone…subtract your weight in pounds from 746.